We are cricket crazy nation and IPL is the biggest festival of cricket. I call it festival because it has everything in it from cricket to glamour and from entertainment to controversies.

The biggest problem we face when IPL is going on is guests at home. Curiously, some of my father's colleagues came to our house just the same day as the IPL started. It was terrible because I didn't wanted to miss the opening match. As everyone will discuss it the next day and I didn't want to be the only one who missed it.

First I thought they will leave soon but within minutes I understood they are going to stay long when they said yes for the snacks as soon as they were offered it. I thought they are here for a long haul and may even stay for dinner.

Now, it was on me to find a way to watch the IPL. The time was ticking.An idea just struck me. I started making weird faces. My father instantly noticed it, "What happened to you ?" he asked. I said "I'm not feeling well,some stomach pain is there"

"You should have some water" my father replied. My plan was working and I have an excuse not to sit there. I went inside made the same face infront of my mother and asked for some water. She got a little worried "So, how are you feeling?" my mother asked just as I finished drinking the glass of water.

"It's not well, maybe should go to the toilet". I said and without even waiting for a reply ran towards it. Closing the door of the toilet, I felt like have won the world. Yes, my trick has worked.

I put the headphones on my ears and opened the live streaming of the match on my mobile and started watching it. Though I was sitting in the bathroom I felt like I was enjoying the match from the stadium. Just a few minutes ago I thought I would miss the match but now I watching it live. This was a victory. :)

I think my parents understood the plan, though they knocked the door few times out of concern but after that they understood that it was just excuse. When they guests left, my dad knocked on the door and said, "guests have gone, now you can come out and watch it on the television". I wondered did they knew it from the start ?  :) 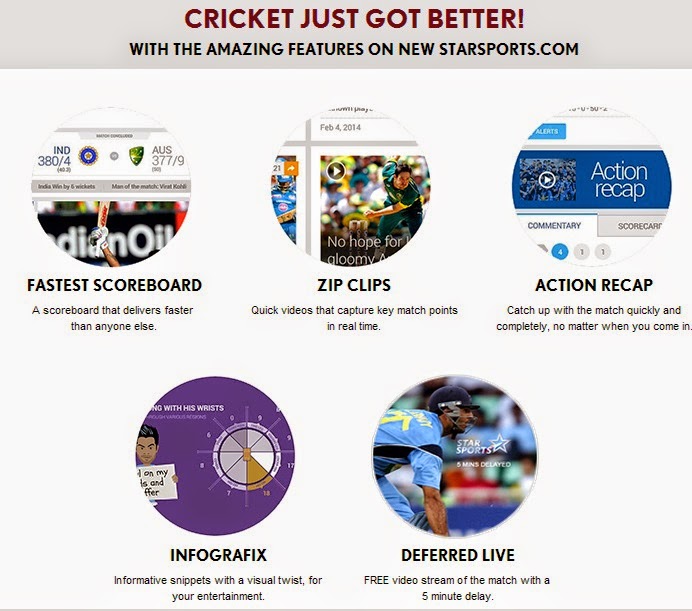 What I like about new Starsports.com is the action replay feature. Earlier if someone used to disturb you in the middle of the match then that moment used to be lost but now because of starsports.com we are able to preserve those moments and watch them again and again.

It's a common thing that some asks you something and the moment you looked towards them you missed a brilliant wicket and wonderful boundary but now you don't have that tension. You are much more relaxed. I think this is a very wonderful change starsports has done.

This post is a part of Cricket just got better! Activity by starsports.com in association with BlogAdda.com.
Posted by Unknown at 3:21 PM