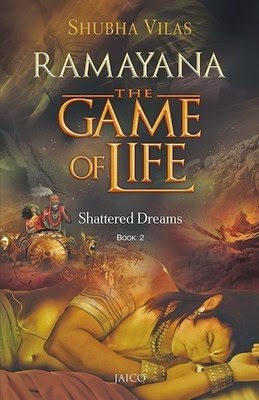 Author Background - Shubha Vilas, a spiritual seeker and a motivational speaker, holds a degree in engineering and law with specialization in Patent Law. His leadership seminars are popular with top-level management in corporate houses. He also helps individuals deal with modern-life situations by applying the teachings of the Bhagavad Gita, Ramayana and other dharmic traditions.


Blurb  - Shattered Dreams is the sequel to the national bestseller, Rise of the Sun Prince, in the new spiritual and motivational series Ramayana- The Game of Life. Twelve joyful years have passed in Ayodhya since the wedding of Rama and Sita at the end of Book 1. Now, in Shattered Dreams, Shubha Vilas narrates the riveting drama of Rama's exile. Through tales of Rama's unwavering and enigmatic persona, the book teaches us how to handle reversals positively; through Bharata's actions, it teaches us to handle temptation; and through Sita's courage, to explore beyond our comfort zone. This complicated family drama provides deep insights on how human relationships work and how they fail. With Valimik's Ramayana as its guiding light, Shattered Dreams deftly entwines poetic beauty from the Kamba Ramayana and the Ramacharitramanas, as well as folk philosophy from the Loka Pramana tales, to demonstrate how the ancient epic holds immediate relevance to modern life. Experience the ancient saga of the Ramayana like never before!,Power of the Powerless,When Losing Is Winning,Test of Intentions,) A Forest Weeps,Ayodhya Parts with Life,Accepting Difficulty with Dignity,Boons Become Curses,The Ego Maniac,In Hope and In Despair

When you are writing about the characters from mythology the author has to be more careful and the responsibility to justify the characters is also there. The book deals with a part of Ramayana, the author has said in the note only that the book is not just inspired by the earlier versions but will have no twists. So, the book didn't have much to offer to the people who have already read Ramayana. According to the Author the book is written in such a way that it will feel like a new-age thriller. To write a thriller with a story which is already known to reader was an impossible task the author took in his hands.

Merits -  The merits of the book lie in the fact that if you haven't read Ramayana till now and want a new age interpretation then this book could serve you well. Another important thing is the language used in the book is really simple hence it will cater to all kind of readers. The book is wonderful to start your journey into Indian mythology.

"As Rama walked on and the trailing crowd kept crying, almost as if trying to stall the Sun Prince's progress toward the forest, the Tamasa river transformed into a wall and the sun disappeared behind the mountains. The sun, too, wanted Rama to stay back in Ayodhaya for one more night. Soon the sky turned as dark as Keikeyi's mind, the very mind Manthara had poisoned." Pg 211

The book also covers a Ravana, the anti-hero in detail. The author has tried to bring light to the different sides of Ravana.

"Ravana stomped in amid much pomp and music. This was Golden Lanka's golden era. Ravana's oppressive, indomitable power left everyone shocking like a leaf. What a sight to behold : The kind had demigods for slaves! Pg 59

Demerits - The biggest demerit was that the book didn't have anything new to offer. It is a compilation to suit the new age audience. So, if you are aware of the story then it will be a dull task to go through this book which also doesn't offer any twist in the tale.

The words and sentences were repetitive hence will become boring for a reader. The thriller should be fast paced and less words should be used to describe a scene.

"The kind abandoned his nightmare analysis to face a far more worrying reality : a strand of gray on his head ! He looked again. Goodness! His head was teeming with gray ! His duties as king had kept him too busy to even realize that he was graying and growing older. Perhaps the monarch's white umbrella camouflaged the grays. There was no escaping the trith now. He was aging and aging fast." Pg 4

There were notes in the bottom of the pages. I felt there was mismatch in the writing styles in the body and in the footnotes.

"Prayer peppered with a feeling of helplessness is a tool to attract grace. But grace really descends when this prayer is unobstructed by the transparent wall of pride in one's abilities." Pg 7

Verdict - I feel this is a really good book to start your journey towards Indian mythology. The book can be used to read the old story in today's language. It has it's limitation that it doesn't offer anything new and hence it won't appeal much to the people who are aware of the mythology.

This review is a part of the biggest Book Review Program for Indian Bloggers. Participate now to get free books!
Posted by Unknown at 8:42 PM