Book Review : Guy on the Sidewalk - A Novel 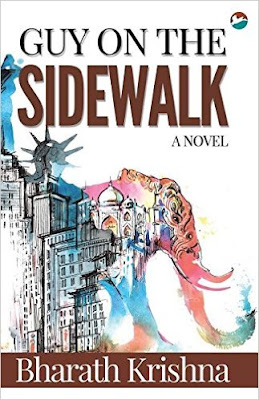 Author Background - Bharath's resume reads like a kaleidoscope of sorts - a bachelor's degree in agriculture, double master's degree in management, and years of professional experience in marketing, teaching and IT in India and the United States.


Blurb  - Who am I, where do I belong and what am I meant for in this short life in this big world?

For Jay, life was a series of defensive detours until he gathered the strength to listen to his inner voice with honesty and decided to take life head on with fearlessness. Making the move from India to America was momentous. He sought to make something of himself, however, his yearning to live in his country and among his people never ceased to bother him. Over six years, despite the luxury of opportunities in the United States, he wondered, is this all there is? He left home to create a better life, but he could have never imagined that though his better life might be found in America, his best life might just be at home, in India


Review - The name of the novel intrigues you and that is the reason I was really interested in going through this book. The author is a blogger also hence I felt it must be better than most of the books that are published these days. Bloggers, most of them, understand the concept of writing for an audience hence when they write a book, you are assured that the basics would be right.

The writing in the book is really crisp and you can easily move from one page to another or from one chapter to another. I won't say it grips you but I would use the 'flow' to describe it, it has a flow and you can move with the flow of story.

As the author himself has said this story is neither an inspiration nor a tragedy, neither a success nor a failure, neither a drams nor a comedy. This is just his story - as it happened. It was like a puzzle to me, I was feeling good about the book but I was not able to describe it.

The book is not like something which will hit you straight away but it stay in your mind. The book can be best described as a comparative study of the societies and relationships. It is not just how the author sees the world and what he understands but he continuously compares his own thoughts with the people around him. Sometimes he would take a general perception of a thing and then he would compare it with what people are actually thinking. On surface, people will only see that this is just a NRI comparing US and India but as you study you understand the commentary done by the author on the smallest and weirdest of the topics.

Some lines which I really loved -

"God didn't listen to my prayers to bless me with a seat next to a young Indian woman. I definitely wouldn't have got bored with her fake American show off. Instead, God gave me the opposite - an old Indian man. The only thing common between what I asked for and what I got was "Indian" and needless to say that I was experiencing it." Page 39

"No I am not stopping my studies. At the same time, I don't want to hop from one degree to another without a purpose. I don't think these degrees are adding any value to me, or I should say they are not motivating enough for me to put in serious efforts. Either I should have complete dedication to what I am doing, like you, or just quit and look for something I really like" Page 55

"I am sorry, sir. We need some id proof," she said hesitantly. "Will my passport work?" "Yeah, sure." "But I don't have it right now. I'll take the membership in my next visit."

"Do you want to still get the book, sir?"
"Yes." I was in a hurry to start my new book, though I hadn't completed the one I was already reading. "Thank you, sir. See you again," the girl said, with a big smile.

She was so cordial that any guy listening to her in India would have misconceived that she had fallen in love with him and really wanted to see him again and again. Page 126

The drawbacks in this book lies in the fact that the book goes at a flat pace till the end. To get a mass appeal one needs to make it more gripping. I personally felt that characters could be sketched more better. These are some minute but important things the author should take into account.


Verdict - The book is a good read, writing is crisp. It will definitely leave you with lots of things to think about as it enlightens you with so many perceptions and thoughts which are prevalent in our society.

You can buy the book here
Posted by Unknown at 8:30 AM