let me start by saying that I'm no moral police or a crusader who is here to give people any moral lessons. With this post I'm just trying to bring some points related to this debate of virginity vs morality into perspective.

In last few days I have read quite a few post about this topic and people have given varied opinions on this.Though I relate to many of them to a certain extent but there are some bloggers who are slapping their views in the face of their readers without taking the perspective from both sides.

Two posts are written about the fact that Virginity is not in the hymen. I totally agree with the statement that but not with the conclusions that are drawn from this statement. Matheikal writes “Virginity does not lie in the hymen but in the brain, it’s an attitude, a commitment,” I have to say his post is really thought provoking.

When it is in the brain and it is considered as commitment then how can somebody who hasn't been committed to themselves be trusted. The shallow beings who have been lustful and couldn't control their desires has no right to demand anything from anyone. Who is demanding this respect ? I read long ago that respect is commanded not demanded. Nature of the person never changes and if a person don't respect commitments then even after marriage there is a huge chance of infidelity and here I just don't mean sexual but in mental level as well.

Let me make it clear that I'm not talking about rape survivors here. I feel they are the victims of society. They can't be blamed for someone else's crime. As I wrote in the comment of one the blogs I read on this topic that I don't have any problem in accepting a rape survivor.You can Google and find many stories where boyfriends have married their girlfriend after their girlfriend's faced rape. 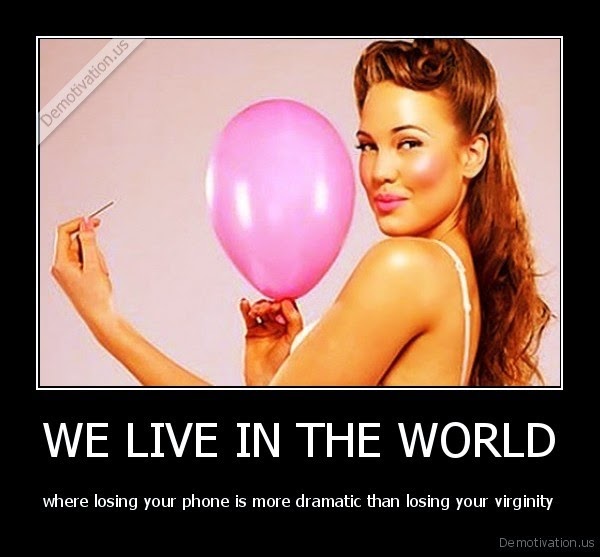 
There can be just two justification for losing your virginity by choice, first you were in love with a guy and second you were adventurous and wanted to enjoy life.

Let's take the first case if you were in love then what's the point in marrying someone else ? and what if your lover wants you back again ? and since you have fall in love twice,just assuming that the person who is free enough to lose virginity would definitely marry someone they love, what is probability that you may not fall in love again ?

Second point is straight forward, the person don't value virginity or commitment and they should definitely find a match who have s.

I feel the most balanced point here was given by Nandini, "I feel if you are a virgin yourself, only then accept a virgin for yourself. If you've allowed yourself to be used and had your fun (with multiple partners) then don't practice hypocrisy."

Some people replied to my comment on this post that I have said that this is balanced because this suits my point. Which point ? I couldn't get that. If you are against this point then you mean to say you want to compel people who are virgin to marry people have had their fun and don't respect commitment. They are totally different people.This point also says that if you are not virgin then you shouldn't be asking for the same in the partner. Hence, I say it is a balanced view.
If two virgins are marrying each other then this problem won't arise. This debate stems in only when a person who is not a virgin wants to marry someone who is a virgin. I think the problem is created by these people only.You have done what you wanted to do and I'm totally fine with that but now you want that everyone should accept your thinking and your mindset which is not possible. You have to respect other's point of view.

I recently read a research called “Do-Gooder Derogation,” or our tendency to put down others if we feel they are morally-motivated. When someone’s behavior is overtly moral, we often feel annoyed and resentful, rather than impressed or inspired.

As Burt summarized, Guys, appreciate that marriage is a personal thing and people have their own preferences. Imposing ‘your’ preference and morals on the other is infringement of the other person’s rights. What 2 people do, till the time they are not infringing on anyone else’s rights, should not matter to you.

In my understanding the people who are imposing their own morals on others are no different than the moral police.

India celebrates diversity and it's time we celebrate the diversity in sexual preferences but this can't be done by pushing forward your view to others. We have to learn to respect each other's belief systems, choices and preferences.
Posted by Unknown at 5:21 PM

Email ThisBlogThis!Share to TwitterShare to FacebookShare to Pinterest
Labels: essay